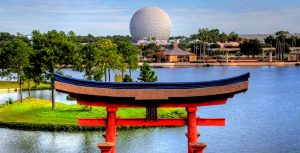 The restaurant will be operated by Mitsukoshi USA, which also operates two other restaurants at the pavilion—Teppan Edo and Toyko Dining.

It will feature a setting inspired by nature and takumi, which means “artisan” in Japanese.

The restaurant will join other signature dining offerings at Disney World, including California Grill (at Disney’s Contemporary Resort), The Hollywood Brown Derby (at Disney’s Hollywood Studios) and Paddlefish (at Disney Springs).

“Once completed, the restaurant will add to the rich tapestry of authentic cultural experiences available to guests in World Showcase,” Alex Dunlap, food & content relations coordinator, said in a Disney Parks Blog post.

Disney didn’t share when the new restaurant is expected to open.

The Experimental Prototype Community of Tomorrow (EPCOT) was an unfinished concept developed by Walt Disney. Its purpose was to be a “real city that would ‘never cease to be a blueprint of the future,'”designed to stimulate American industry to develop new ideas for urban living. The city was planned to be a company town. The “EPCOT idea” was part of Walt Disney’s original plan for the property purchased near Orlando, Florida. After his death in 1966, the property became the Walt Disney World Resort in 1971 and a theme park based on the idea opened in 1982. A portion of the original architectural model of the concept is on display on the Tomorrowland Transit Authority PeopleMover, located in Tomorrowland at the Magic Kingdom.